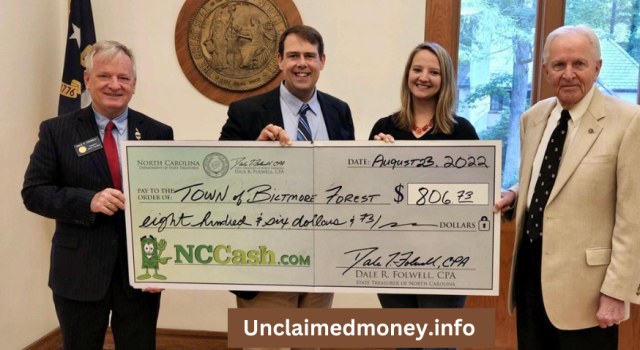 North Carolina‘s NCCash.com has set a goal to return $120,000,000 in unclaimed property, cash, and other assets to residents, governments, and organizations this year. Treasurer Dale Folwell stated that this would surpass the record $105,000,000 in 2021 payouts.

During Tuesday’s Ask Me Anything conference call, Folwell spoke about the Department of State Treasurer’s Unclaimed Property Division website.

He said, “We’re seeing more people than ever this year.”

The treasurer has paid $39 million in cash and property to more than 35,000 claimants since the beginning of the new fiscal year on June 30. This includes forgotten bank accounts, wages and utility deposits, proceeds from insurance policies, and abandoned safe deposit boxes.

The department currently has more than $1.2 Billion in its escheats funds, which preserve abandoned and unclaimed property until their rightful owners claim them. Folwell reports that the NCCash holds 17.7 million properties, with 19 million owners.

The unclaimed property division has been in operation for many decades. However, new laws allow the treasurer to make more efficient efforts to return property. This has led to record payouts in recent times, he stated.

This program will allow the department to choose 3,000 claimants randomly and to mail notification letters to those who match the information in the state’s file.

Folwell stated, “if all this stuff is in line, we send out a letter” regarding the unclaimed property.

The funds will be sent immediately if all information in the letter is correct. If there is no response within nine weeks, the state will automatically send the money.

Folwell stated that “Ten per cent” of letters are returned undeliverable. Folwell stated, “That is why we wait for eight to nine weeks for those letters back.”

Through August, 16,986 claims were paid by the NCCash Match program for nearly $7.3 Million.

The treasurer also prioritized returning cash to local governments, non-profits, and other groups during speaking events across the state. Recently, $310.58 was returned to the Boys & Girls Clubs of North Central North Carolina.

State officials plan to continue outreach at the North Carolina State Fair, which runs from October 13 through 23 in Raleigh.

Folwell stated, “Sometimes it is tens of thousands of dollars we give away at the state fair.”